Malta: North of the Island

The northern part of Malta features some of the most rural areas and open countryside around the villages of Mellieha and Mgarr. However, the adjacent St. Paul’s Bay area is also home to two of the most popular tourist resorts in Malta – Bugibba and Qawra. The north coast of Malta has numerous beautiful sandy beaches for the sunbathing and swimming devotees and a few rocky beaches for those snorkelling enthusiasts. The main coastal resorts and larger beaches are found in this part of the island making it popular with tourists. 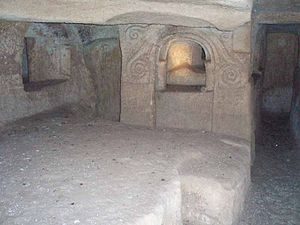 The Salina Catacombs are a cluster of small catacombs located near the Church of the Annunciation in Salina. Although small when compared to the catacombs of St. Paul and St. Agatha in Rabat, they are an important record of the considerable community. The catacombs open onto a low ridge facing a now lost Roman Harbour, making the small site archaeologically significant. The site comprises five hypogea cut into the vertical surface of a small quarry. A number of other openings can be seen in rocky outcrops around the site. The most impressive hypogeum is adorned with two decorated pillars, an agape table and two tombs, rarely found outside the catacombs of Rabat. The window tombs that surround the agape table suggest that it was an important feature of the catacomb. At least two of the window tombs are lavishly decorated with reliefs depicting palm fronds and other spiraled patterns.

Saint Agatha’s Tower, also known as the Red Tower, is a large bastioned watchtower in Mellieħa. It was built between 1647 and 1649, as the sixth of the Lascaris towers. St. Agatha’s Tower was the last large bastioned tower to be built in Malta. The structure consists of a square tower with four corner towers. Cannon ports in the turrets gave interlocking fields of fire along with other large cannon ports in the faces of the main tower. The outer walls are approximately four metres thick at the base and the interior of the tower is enclosed by a barrel vaulted roof. The tower is situated in a commanding position on the crest of Marfa Ridge overlooking the natural harbour, a potential enemy landing site of Mellieħa Bay, with clear views over to Comino and Gozo, and also eastward to the line of watchtowers along the north shore of Malta that linked it with the Knights headquarters in Valletta. It was the Knights’ primary stronghold in the west of Malta and was manned by a garrison of 30 men, with ammunition and supplies to withstand a siege of 40 days. It continued to have a military function throughout the British period and was manned during both World Wars. From the British period it continued its military function being used as a radar station by the Armed Forces of Malta.

It was originally constructed in the late 16th century and contains a Byzantine-style fresco depicting the Blessed Virgin Mary with Christ on her right arm. Tradition has it that the painting was made by St. Luke when he was shipwrecked on the island with St. Paul, but recent studies have shown it to be an early 12th century work. The church expanded several times to accommodate the growing population of the village and the roofed veranda is considered a classic example of 17th century Renaissance architecture. Pope John Paul II blessed the sanctuary during his visit to Malta in May 1990.

Selmun Palace is a palace on the Selmun Peninsula in Mellieħa. It was built in the 18th century by the Monte di Redenzione degli Schiavi, a charity that was founded during the reign of Grand Master Alof de Wignacourt in 1607 to finance the redemption of Christians enslaved by Ottomans or Barbary corsairs. The palace used to be rented out to knights of the Order of Saint John as a place to relax and hunt wild rabbits, which were commonly found in the area. The rent money contributed to the redemption fund. The palace itself was built sometime in the 18th century, although the exact date of construction is not known. The earliest record of the structure is on a 1783 map, when it was referred to as Torre Nuova (new tower). The palace’s architect is unknown, but it has been attributed to Domenico Cachia.

The ancient Beehives in Malta are found on the eastward slope of a hill overlooking St. Paul’s Bay. This ‘bee- house’ consists of a doorway running into a passage parallel to the façade, which is pierced with holes. Each hole held a cylindrical pottery beehive laid on its side with a small hole to the exterior which the bees used and a larger one to the passage. This latter was blocked with a tile until the beekeeper wished to remove the honeycomb.

Buġibba is a coastal town within St. Paul’s Bay. This is a large and popular area stretching for 5km along St Paul’s Bay, around Qawra Point and into Salina Bay. Bugibba is the largest resort in the area, with good views of the bay and its islands. Proving its popularity, Bugibba has the liveliest nightlife including bars, restaurants, a cinema, bingo halls, and even a casino.