Homepage / Articles / Malta: Faith through the Ages I

Malta: Faith through the Ages I

Malta’s long and turbulent history and geographically strategic position has exposed its people to varied belief systems over the millennia from prehistoric fertility cults to the monotheistic faiths of Judaism, Christianity, and Islam. This blog will examine faith in Malta from Prehistory until the Norman occupation and a follow up blog will look at faith under the Knights of St John until the present day.

Faith, as with much else regarding prehistory in Malta, is blanketed in much mystery and therefore speculation. Malta boasts the oldest known places of worship in the world which also happen to be the oldest free standing human constructions, predating the pyramids of Egypt and Stonehenge by more than 1000 years. Solid limestone temples, with their intricate designs and layout, litter the Maltese Islands, but archaeologists mostly speculate as to their exact use in worship and even as to how they were constructed.

Subterranean tomb-based temples which were lobe or egg-shaped temples gauged out of the living rock at Xemxija from around 4100 BC believed to have been used by early life-cycle and fertility cults are the oldest signs of human worship on the Maltese Islands and indeed of human occupation.

The Temple phase which followed (known as the Ggantija phase after the temples in Xaghra in Gozo) saw the construction of at least a dozen major temples built of massive limestone blocks. The temple interiors were fitted with altars and intricately decorated. A common theme in many of the temples is the image of a reclined fat lady which give modern scholars a strong indication that the temples were indeed early sites of worship for fertility cults. Today, the temples are open to the sky, but at the time of their construction and use they would have been roofed with stone slabs, animal hides, timber or brushwood.

The Ggantija phase was the most active in terms of the number of temples constructed but the Tarxien Phase of between 3,000-2,500 BC saw the completion of the monumental Tarxien Temple complex. It is not clear whether this impressive temple served as some sort of ancient pagan cathedral serving as the focal point of worship for the whole of Malta, but the size and complexity of the structure required a massive commitment of resources and was therefore certainly of some importance.

The early underground tomb style seen in the Xemxija tombs later gave rise to another line of temple development. At Hal Salfieni, close to the Tarxien temples and therefore considered religiously related, is an elaborate hypogeum of underground chambers. Discovered by accident in 1927 this historical gem has been UNESCO world heritage listed. It consists of three extensive levels of interconnected underground chambers dug out much like an ant mound. The skeletal remains of more than 6,000 bodies have been found. Near the Ggantija temples a similar but smaller and less well-preserved hypogeum was found. Burial rites for these hypogeums are not well understood but it is abundantly clear that the dead were not allowed to rest in peace for many of the skeletons were found incomplete or with disarticulated bones.

One of the greatest mysteries surrounding the Maltese ancient temples is how they could have been constructed since it is believed that the population of Malta at the time could not have been greater than 4,000, even though it was likely to be growing. The building and upkeep of such large structures would have consumed a great deal of time for many people, to say nothing of the upkeep of those who performed the sacrificial rituals involving livestock. Therefore, there is some doubt as to whether the Maltese population of the time would have been able to build such grand structures without external resources.

By 2,500 BC the temple culture began to decline and for many centuries some of the temples were used by other visitors from what was likely the heel of Italy. These were cemetery people who used the temples as crematoria. Malta’s pre-history came to a close in around 750BC when the Phoenicians occupied the islands and exerted their influence on the existing population but had established little in the way of permanent settlements. It may be deduced that the Phoenicians brought with them elements of their religion which was death based faith borrowed in part from the Egyptian beliefs regarding the after-life. A small number of Sarcophagi like those used by the Phoenicians were found on Malta but it is hard to determine how widespread this death based faith was amongst the population.

During the 2nd Punic War Malta fell into the hands of the Romans after it was finally wrenched away from the Carthaginians. Although, as with the Phoenicians and Carthaginians, no specifically Roman pagan religious structures survive, Malta must have hosted such structures at the time, if only to service the worship needs of the Roman garrisons and officials residing on the islands and it is unlikely that some of the Maltese locals would not have adopted the Roman gods.

Perhaps the single most telling event in all of Maltese history, what historians would state as a random occurrence but the Maltese population have always held as divine direction, was the shipwreck of the apostle to the gentiles by St Paul the evangelist on the islands in 60 AD.

Paul was being taken to Rome to be tried as a political agitator, when the ship carrying him and 274 prisoners and Roman soldiers was caught in a violent storm. For two weeks they floundered on the Mediterranean Sea, all but Paul believing that they were to die. Through the faith and charisma of St. Paul they came to be wrecked at a site is traditionally known as St. Paul’s Island in St Paul’s Bay in the north of the main island. The welcome given to the survivors is described in the Acts of the Apostles (28:1-2) by St. Luke:

“Once we had come safely ashore we learned that the island was called Malta. The inhabitants treated us with unusual kindness. They made us all welcome by lighting a huge fire because it had started to rain and the weather was cold.”

As the fire was lit, Paul was bitten by a poisonous snake but he suffered no ill effects. The islanders took this as a sign that he was a special man. This scene is depicted in many religious works of art on the Islands. According to tradition, the Apostle took refuge in a cave, now known as St. Paul’s Grotto in Rabat, Malta.

Paul and his comrades wintered in Malta and during his stay he was invited to the house of Publius, the Romans’ chief man on the Islands. It was here, according to tradition, that Paul cured Publius’ father of a serious fever. Publius is then said to have converted to Christianity and was made the first Bishop of Malta. The Cathedral of Mdina is said to stand on the site of Publius’ house. Malta was one of the first Roman colonies to convert to Christianity. 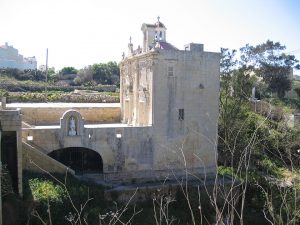 While a part of the inhabitants of Malta adopted the Christian faith during and following St Paul’s visit, others among the population remained pagan and since the islands were a Roman colony, it was at the time dangerous to be Christian under the emperor Nero and his successors and therefore Christians fearing for their safety had to worship in secret and would often have to take refuge underground.

The St. Paul and St. Agatha catacombs in Rabat represent one of the earliest complexes of catacombs in Christendom. While their primary purposes to bury the dead (It was illegal during Roman times for the dead to be buried within city walls and Rabat was then a suburb outside Mdina), they likely would have served the role of acting as a place of worship under religious persecution and as a refuge whenever a purge of Christians occurred. The catacombs shed light on the way early Christians lived. The catacombs of Malta, which are big in size, compare very well to those of Rome. This is proof of the strong faith in the Maltese islands. From places of burial of the dead to places where they met for their spiritual meetings.

While St. Paul’s catacombs claim to be the largest in Malta, in fact the catacombs of St. Agatha’s are double the size. Unfortunately, though you will only see a small section as sections containing frescoes of the 16th – 17th century is closed off to protect them from human exposure.

The decline of the Western Roman empire saw the seat of power shift to Byzantium (modern day Constantinople). There is little evidence of religious practices in Malta during the Byzantine occupation but there is little doubt that Christianity would have flourished in the two centuries before they were ejected by the Arabs of North Africa. There are references to a bishop of Malta in pope Gregory’s (590 – 604 AD) register of letters and it can be established that Malta had a bishop in 592 AD.

Malta was attacked by an Arab force in 869 AD. The Islands were far from any possible reinforcement or resupply so after significant resistance the garrison capitulated and was taken into slavery as was a significant portion of the population. The Arabs, however, had little use for Malta and after taking slaves, looting and pillaging, the islands it seems were deserted for a period of about 100 years. While there is much evidence existing for the desertion of the country (such as the fact that no Byzantine or Roman place names survived) there is the possibility that small isolated communities may have lived in remote valleys and if Christianity survived following this it was a minority religion.

Count Roger I, the Norman king liberated Malta from Arab occupation in 1091 but the country continued to have a predominantly Muslim population until his son Roger II ascended the throne. Indeed, it is unlikely that there was much change in the day to day lives of the inhabitants at all as the count showed little interest in the affairs of Malta and it was only his son who was determined to maintain Christianity within his dominion that Christianity began again to flourish as a faith in Malta.